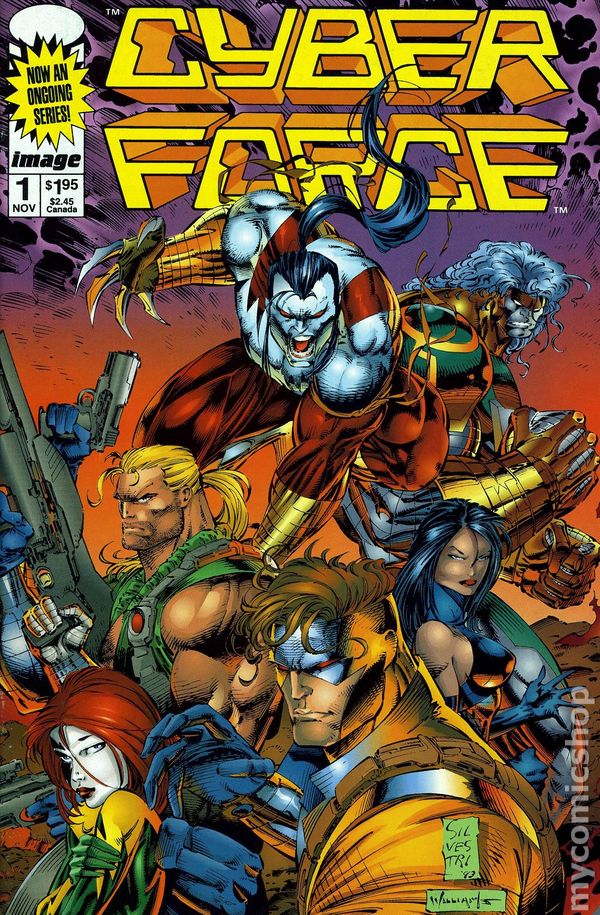 One of the more seasoned professionals of the Image 7 was Mark Silvestri. Silvestri was as much of a name in the 80’s as the 90’s and Rob Liefeld often referred to Mark as the best illustrator of the bunch. Seeing some of his Marvel work in the 80s, there’s evidence a’plenty that it was true.

When it was his time to put a number 1 out, it was one to look for, if you were in it for the art and in that regard he did not disappoint.

Cyberforce 1 was released 9 October 1992 and was the last of the initial creators’ first series to be released that year. Several of the creators’ studios put out companion titles, Rob Liefeld’s Extreme Studios and Jim Lee’s Wildstorm being the obvious culprits there, but this was the 6th number 1 of those initial debuts.

Cyberforce was very reminiscent of Marvel’s X-Men. Well to be honest that’s being generous. It was a more blatant copy than the subject of my previous post WildC.A.T.S. and this did not really help it stand out on an already stuffed marketplace. It did enough sales to warrant an ongoing and allowed Silvestri’s studio Top Cow to expand into other titles such as The Darkness and Witchblade, both of which proved successful at the time

The characters and concepts in Cyberforce have struggled to maintain their position in the marketplace and have had several reboots and restarts.

As of this writing there doesn’t seem to be a Cyberforce series being published, but maybe one will be along soon.

Next time: Things get shiny with the 7th founder’s first comic