My son wanted to blog, because he has seen me do it and was keen to do it himself, this was his first attempt, which went on My Marvel Life

via My Pokemon World – The Journey Begins

Had an idea for a blog project, 1st episodes of TV shows. Dunno if it should be a regular feature here, or maybe it’s own blog.

Just a random thought for the evening.

Well that could be any day of the week really can’t it? I’ve taken it easy on the mental health stuff recently, focusing more on the calendar and other geeky stuff. Partly because it’s not something I want to constantly talk or think about, partly because it’s better to concentrate on more positive things isn’t it? But it’s not really something that has gone.

I will never say I am no longer depressed, I have good days and bad days and for the last 6 months, there’s more more of the good, so that’s a positive. But my anxiety is still very much there. I over think, worry about nearly everything and when I have nothing to be anxious about, I am convinced that I am missing something. How fucked up is that? My subconscious mind looks for things to be stressed about. I worry about getting older, about work, about the welfare of my loved ones and my relatives and all the while, my brain kicks me for being so anxious, as if it’s a personal failing or something. When work is busier than usual (with the financial year ending this week) it’s worse, so I am as  the say goes ‘feeling it’ at the moment.

So how do you battle this fresh hell? Well first I have to remember that it’s not fresh. This is no different from any other time when anxiety grabs at me. I am no stranger to this shit. So whenever I have been this way before, I have got through it. Experience, mistakes and disaster are often the best teachers, so I can use techniques that have worked before to ground me, or refocus my thinking. Another way is expression, hence this post. Speaking to someone about being anxious and knowing other people suffer anxiety conditions is a great way to remember that what you’re feeling is not an uncommon experience. Another technique, which is how I got through March is the ‘brass ring’ approach. Find something to look forward to and put your focus there. I had a fantastic weekend away not too long ago. (I think I will post about that sometime soon) and having that at the end of the tunnel really helped when things weren’t so good. So maybe I should be planning the next thing to do.

But in all fairness, the best way to battle the multitude of demons has been Super Sam and the MIGHTY Rosie, whose introduction to my life remain the best things that have ever (or will ever) happen to me. Last night me and the MIGHTY Rosie were laughing our arses off at a TV show that she had never seen before (more on that story another time) and just prior to writing this, I was using a stress ball my son made out of beads that absorb water. Stress ball wasn’t his intended use for it I am sure, but his wonder and excitement persist in my memory whenever I hold it.

Whenever you feel low remember this, you have survived. Whatever has tried to break you, kill you or ruin you, it hasn’t. You are still here, mightier than whatever befalls you. I am going to keep going, because I have too much to do, too much to look forward to and too much to live for.

I feel better after writing that.

In the long ago past, comics were written month to month, operating as single stories that may link to others later, or the occasional multi-part saga, but you tended to get 22 pages per month that were complete in and of themselves. It’s not quite like that now, is it? With one and done stories the exception and not the rule and with the rise of (sigh) decompressed story-telling. More and more the model for pacing is designed not for the single issues on the newsstands, but for the collector based direct market. So instead of each comic being its own thing, they became chapters of a larger tale. As well as giving the quieter moments more room to breathe, the pacing allows the chapters to be collected into collected editions or trade paperbacks more easily.

Writing for the trade is not unknown to any comic fan and it’s the way most people who are not comic fans experience them, either in the trade paperback form or as a set of separate comics bunched together. The MIGHTY Rosie found comics like that, first reading the 8 part Up Up and Away story in Superman and Action Comics. What the upshot of this is that comics are read both in single issues as you buy them, but can be re-read as part of the overall whole. Read 1-6 over six months and then re-read 1-6 in one day and it’s a different story.

Last weekend, I went to Caewrys in Wales with Super Sam, Wilma the dog and the MIGHTY Rosie (more on that story later) had a lovely time and there was an amount of downtime and rather than listen to a podcast or watch TV when we were all taking five, so I packed some comics. Didn’t read them all, it was very much a being together weekend, but I made a start.

The series I started on was Boom Studios Mighty Morphin Power Rangers. I have up until this point bought 0-24 as well as the 2 annuals. 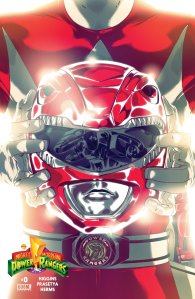 Ok, quick aside. I was a fan of the 90’s X-Men animated series which was on Saturday morning when the first series ended the timeslot was taken up by a new series called Mighty Morphin Power Rangers. I will be honest, I was less than enthused with this series, but periodically I would look in and see what was happening. It was heavy on action, mostly cut from Japanese program Kyoryu Sentai Zyuranger, light on anything resembling characterization and formulaic. But there were good ideas in there, as well as bonkers action with monsters and giant robots. I watched some of the first 3 or 4 series, but had no access to any of the original Sentai footage, or at least not till many years later. I did watch some related stuff called Tokusatsu, which included Sentai characters, I wrote about it here, but that’s by the by. The point is, with some more depth to the writing, this could be more enjoyable and that was borne out last year when Boom started their MMPR title. 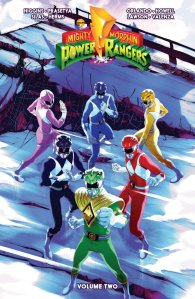 Written by Kyle Higgins with other creators on the art, this series is set shortly after the Power Rangers TV episodes Green With Evil.  We have the original 5 characters from the series Jason Scott, Trini Kwan, Billy Cranston, Kimberley Hart and Zach Taylor, their mentor Zordon of Eltar and their mascot/sidekick Alpha 5, all trying to cope with the inclusion of recently freed Tommy Oliver. There’s an evil doppelganger, hidden histories, stealth bad guys, parallel worlds and hints at future events that the TV shows have already revealed. It’s a tie-in comic to a below-par TV show that at this point is over 25 years old. This has no right being any good. But it is. I have in fact enjoyed it tremendously and it’s been consistently entertaining throughout its run. Is it high art? No. Is it top quality comics of the best kind? No. But it is fun and enjoyable and whenever I see it’s out that week, I’m happy for that.

It’s about to start a big crossover featuring other ranger teams and since my son Super Sam and I are watching Power Rangers from the start (we’re up to the 9th season/7th variation Time Force) and am looking forward to whichever characters that he and I know, or ones we have yet to watch.

Another pleasant surprise has been the recent Avengers event No Surrender.

Currently, Marvel is putting out 3 Avengers titles: Avengers, US Avengers, and Uncanny Avengers. I will be perfectly honest, I have no real interest in any of them. The art on Avengers leaves me cold, US and Uncanny haven’t really made too much of an impact and for me, the loss of prestige in the name of Avengers is as bad as it was under Bendis’ tenure on that line of books. This seems to be Marvel’s attempts to bring the some of the grandeur and epicness to what has in the past been a flagship book. This comic is coming out weekly, starting in Avengers 675 (yay, renumbering again) and moving forward, so there is no US Avengers or Uncanny Avenger and the creative teams are shifting to keep up with the schedule. I read the first issue on a whim but had to take a break shortly after since the comic became harder to get hold of, given the increased demand. So as it turned out, without that being my original intent, I read parts 1-9 fairly close together. As a result, I have been able to view it as close to a complete whole and I am happier for it.

The story Mark Waid, Jim Zub and Al Ewing is a mix of the old miniseries “Contest of Champions” and the Doctor Who story “Stolen Earth.”  Earth has been stolen, most of the world’s superheroes and villains are in suspended animation and the alien groups Ebony Maw and Lunatic Legion are battling for some alien artifacts on Earth and the only hope for anyone to make it out of this alive is parts of the several Avengers teams that are forced to band together along with a time-lost Avenger who has returned to help. There are thrills, spills and surprise twists and a bit of a motley crew of heroes called together by happenstance to fight a battle too big for anyone else to fight. Now isn’t that what the Avengers really is? There aren’t many heroes in here that feel that iconic Avengers type of characters, but this most certainly feels like an Avengers title. I wasn’t expecting that much from this and was glad to see this story vault over that bar with enough of a gap to see daylight. I’m 11 parts out of 16 and it is only getting better. It looks like there’ll be a new Avengers title out of this and I’m kind of excited for an Avengers comic, which was also a pleasant surprise.

So that’s the comics I have been reading as collected. Hope to be doing that kind of reading again soon, when my day starts to allow it. If for no other reason that to inspire new thinsg to write about.