Before he went to bed the other night, in a vain attempt to stave off bedtime for another minute my son asked me questions about Giant  Man. As a counter I told him that I would tell him 5 facts about Giant Man in the morning.  On the way to school I gave him the promised facts and then he gave me 5 and it left me with the idea that Hank Pym has been somewhat unfairly maligned.

Dr Henry Pym’s first appearance as himself was Tales to Astonish #27 and then returned as Ant Man in Tales to Astonish #35, shortly followed by the Wasp in issue 44. Since then, he’s changed costumes, changed names, served with several different Avengers teams, lost his mind (more than once) and has had a more drama heavy career than most comic characters, yet is often overlooked. In comics and in cartoons, Ant Man helped form the Avengers. This is a guy with interesting stories to have told about him.

Ok, before the complaints start, I am going to go off script from my usual format and start off with valid points against Pym, because lets me be honest the prosecution must be heard in this case. Here’s some of the reasons he is hated by other characters.

Ok, for a bio-chemist, Hank has looked into other sciences with varying degrees of success. One thing he did was create an artificial intelligence based on human thought patterns. This became Ultron-1. Ultron-1 escaped and with an Oedipal hatred of Pym then upgraded and evolved and by the time he got to Ultron-5 he just wanted to kill the Avengers, anyone connected to the Avengers and eventually all of humanity. Ultron has killed scores of people, but went on a rampage in eastern Europe, slaying the entire population of Slorenia and the conquest of the Kree Empire, which led to even more 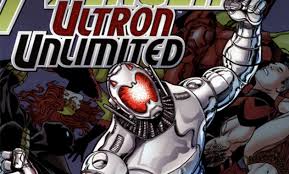 This kinda means that Hank Pym is indirectly a planet level mass murderer. This is sort of mitigated by Ultron’s creation of the Vision, but that’s a black hole of continuity I’m not going to even look at that right now. 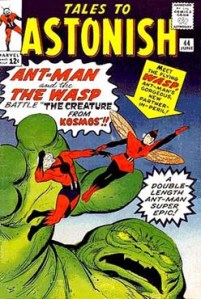 Ok, Hank was married to a woman called Maria, who died in Europe soon after their marriage. Later Hank met Janet, who looked EXACTLY THE SAME and they started going out. Yeah, because that’s healthy. Skipping right by that little therapy visit, Hank experimented on Jan to enhance the powers he had himself, giving her the wings, stingers and at one point antennae. Yup, you read that right, Dr Henry Pym, injected insect DNA amongst other things into his, at that point, teenage girlfriend. That’s crimes against humanity s@@t right there. He didn’t listen to her about her father’s death and got her involved in dangerous activity on a weekly basis and when the Avengers became a thing, it only got worse. 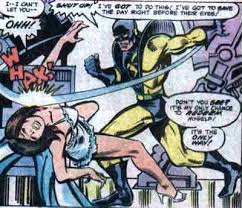 Hank (as Yellowjacket) was struggling as an Avenger and his mental state became more and more eratic. feeling that he was on the verge of being kicked out of the team he helped form, he was at the end of his rope, the story as written was that he accidentally knocked his wife Janet with his hand. By the time it got to the artist, this had become an angry back handed slap and history was made. The thing is, whether it was an accidental knock, or a moment of madness, the fact is that Hank was at the point of nervous breakdown here and while that does explain what happened, doesn’t excuse it. There is no defense of these two things.

However, this is hardly the worst thing a marvel ‘hero’ has done, Black Widow was an assassin, Deadpool, a mercenary, Iron Man has a death-toll that nears Hank’s and Spider-Man and Daredevil both have put more loved ones in the ground than can be counted on one hand. Hank Pym’s great crime is not being popular.

But is that his fault?

Next to Reed (Mr Fantastic) Richards of the Fantastic Four, or may be Bruce (The Incredible Hulk) Banner, Hank Pym may be one of the smartest people in the Marvel Universe, even taking into account Dr Doom, or the engineering genius of Tony (Iron Man) Stark. He’s top 5 at least, but the best part of that is always the worst part of him, that lack of ego. Doom is all ego, arrogant to the point of self destructive, to be honest Iron Man falls into that trap too. Reed Richards is only too aware of his intelligence and it’s value, but Hank doesn’t do that. This is a man who found and perfected a way of shrinking matter. If that was the only thing he did, that’d be ok. All Doom really did was above average robots and a time machine. But Hank also found a way to communicate with insects, developed flight powers on two separate occasions, created artificial intelligence as well as synthetic human beings and still managed to find the time to be an Avenger.

He has been Ant-Man, Giant Man, Goliath, Yellowjacket, Dr Pym out of costume as well as briefly known as the Wasp. All identities that were used by others, often more successfully, he’s a one man Superhero factory. The fact that he’s had so many different personae, tells you that he is struggling with being himself as a hero and as a man. Spider-Man, Captain America, Thor and Iron Man, every single one of them is more powerful, more popular and more immediately heroic, now tell me how a can who can make himself smaller supposed to compete with that. I don’t know who wouldn’t have some kind of inferiority complex.

As you may or may not know, I have had mental health struggles in the past and I still feel the effects today, it’s something I live with and I have my good and bad days, many people suffer with worse and for longer and it all gets ignored by entertainment based media. There are comic characters with different races, orientations, nationalities, beliefs and so one and so forth (not enough, but that’s not today’s topic really) but Hank Pym was one of the few characters in Marvel that actively struggle with this sort of thing. He’s had psychotic breaks where he’s become another person, he’s been split into two people before now and he has actual conversations with ants. This is not a guy with all of his marbles and above that, he’s had more than one nervous breakdown, in the midst of one, he actually hit his wife which I’m guessing he’s taking the popular view of not forgiving himself. Then we get to the fact that almost every evil act that Ultron commits, he feels a degree of guilt. I’m impressed that he has what it takes to get out of bed in the morning.

The fall and rise of Yellowjacket from Avengers 213-231 was a fantastic story that broke and rebuilt a hero and watched him walk away from all of it, one of the few super heroes who did that for any real length of time.

Dan Slott’s run on Mighty Avengers is also a good exploration of the strengths of Pym as a positive character and the Age of Ultron event and Avengers Academy also show positives and are worth checking out.

Also, Avengers Earth’s Mightiest Heroes portrayed him fantastically, it’s where my son found out about that character and even when they introduced Scott Lang to the cartoon, arguably a better Ant-Man, he still preferred Hank.

Dr Henry Pym is a relatable character, he is deeply flawed, haunted by his mistakes and is constantly trying to do better, to pull himself back together and do the best he can. There’s great stories that can be told here about this man doing his best, always sure that it’s not good enough, or a man accepting his place as one of the great minds of our time, yet still out of his depth. We may not have all been to the places he was, but we’ve all at one time or another been out of our depth.

Oh an my son’s 5 things about Giant Man?

1: He can shrink and grow

3: He helped Hawk-guy become a giant

5: He cares about people.

Sometimes I think I miss the point of these characters.