​In a ‘challenging’ year there have been a number of times I needed to get out of my own head and just enjoy this and whilst pickings have been slim, what I have found to enjoy I really have enjoyed. While I have watched a lot of continuing stuff from previous years, there was also a few new shows to enjoy.

I am treating this as a new series, with the entire new cast and producer. After the up and frequent downs of Capaldi’s era, a change was needed. We ended up with a surprisingly enjoyable Bradley Walsh along with a pair of relatively unknown actors as companions, with Jodie Whittaker excelling as the newly female Doctor. It’s a lighthearted show with moments of depth and pathos. This back to basics approach has left me as excited and it’s nice to be excited about Doctor Who again.

I am not a fan of ‘reality’ TV and so this show with it’s contrived premise and forced tensions should have been unwatchable, but I found this rivetting. Eight women of various fitness levels and backgrounds are paired with eight personal trainers of differing disciplines to compete in teams of two in a series of fitness based competitions to win up to $500,000.

It’s heavily product placed and much of the drama is contrived, but with its theme of empowerment, making positive changes and competition moving you forward it was a surprisingly entertaining show. Watching these women grow in confidence as they acquired the strength they felt they lacked was really satisfying. This was a show that proves that whatever health-based changes you make to your body, it’s the changes to your mind that matter the most.

I wasn’t sure what to make of this show when I caught it at the start of the year. It was a romantic comedy, with mostly unlikeable characters. To be honest, that sounds like most romantic comedies to me, but these characters are meant to be unlikeable. Publicist Gretchen and moderately successful author Jimmy are the worst people any of their friends know and sort of end up together without really trying. Add in Jimmy’s flatmate the well meaning veteran Edgar and Gretchen’s best friend Lyndsay who is trying her best to be happy in a marriage that she’s not really invested in, but lords her getting married first over her older sister, Jimmy’s ex. No one here is nice, or trying to be a better person, they’re either oblivous, narcissistic or some combination of both. There’s a season long narrative, but that sort of gives the series a nice ending point and so when the 2nd season started last month, I decided to leave it at one season which I enjoyed. It’s not for everyone, but I really did enjoy this.

Jimmy Carr has made a career out of being a little nastier than his peers. From his insulting introductions on 8 out of 10 Cats does Countdown, to his relaunch of Your Face or Mine alongside Katherine Ryan, he’s best known for nasty jokes, quick one-liners and being singled out for tax avoidance. He takes that talent for tearing people a new one to it’s natural extension with Roast Battle. Roast Battle isn’t original, it comes from an american show with Jeff Ross and Brian Moses, the latter being on here as a referee. The concept is simple, two comedians trade insults and barbed jokes, getting five jokes each with little to no restrictions and the panel (made up of Jimmy Carr, Katherine Ryan and someone known to misbehave in public, we’ve had Russell Brand and Johnathan Ross so far) judge the winner. The jokes are cutting and quite often below the belt. A particular highlight was Bobby Mair and his wife Harriet against eachother and her best line being “You look adopted.” the whole crowd went “Oooooh” at that one. There’s been best friends, girlfriend/girlfriend, husband/wife and at one point father and son. There’s bad language and savage jokes aplenty, but none of it feels mean spirited. This is sparring as much as anything else and it’s made me laugh as hard as anything else this year.

A Discovery of Witches 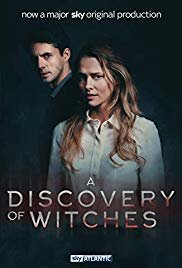 There are very few tropes that get an airing as often as vampires and other supernaturals living in secret. Twilight, Moonlight, Blood Ties, Buffy the Vampire Slayer, the Vampire DIaries, Midnight Texas, True Blood and others besides, so it wasn’t particularly something I had any real interest in, when the marketing started. That said, like the good little geek I am, I gave it a go. There wasn’t the usual flashy effects from day one, the nighttime settings and the angry and tortured vampire. This was mostly set in Oxford, during the day and the vampire was calm and composed the whole time. This was about a society of vampires, witches and demons co-existing through compromise and strict segregation. Diana Bishop (a witch) tries to research a book on the history of alchemy and this brings year into contacts with Matthew Clairmont (a vampire) who needs it for his research into the declining numbers of vampires, witches and demons. This book is wanted by nearly everyone on each side and a massive game of politics and magic grows into a war that threatens the peace between the creatures and the safety of this witch and vampire, who find themselves drawn to one another.

This show is beautifully shot and acted with conviction and nuance by a very capable cast working from a fascinating story with more than a few twists and turns which left the first season with something of a cliffhanger, which I only realised was a season ender after the episode finished. With DVDs, streaming services and catch up TV, I very rarely have anything like a regular schedule for any Tv, but this was a show that the MIGHTY Rosie and I watched this religiously.

New TV this year was very much about quality over quantity, but there was a lot of good stuff as there is every year and no doubt lots and lots of things that I missed as well as stuff that started last year that continued to entertain and with news series slated to start soon and new series of current favourites like Star Trek Discovery, Bojack Horseman and Orville either starting soon or already started, 2019 looks to be another embarassment of riches.

Two down, one to go and it’s back to the cinema.

In a ‘challenging’ year there have been a number of times I needed to get out of my own head and just enjoy this and whilst pickings have been slim, what I have found to enjoy I really have enjoyed.I found a few titles that were new for this year that left an impression.

Domino is a background character from X-Force back in the 90’s. She had potential that has been glimpsed, but never really developed. Gail Simone took interesting b-list characters and fleshed them out in Birds of Prey and Secret Six for DC so was the idea person to give Domino the starting role she deserved. It has action, comedy, high stakes and a relatively continuity light story. It was above all fun.  With representation being very important, a high quality comic with a female lead, mostly female cast and written by a skilled writer is important when the majority of the industry has a predominantly white male feel to it.

Spinning out of an event I didn’t read about a character that I don’t like came this gem.

Take Indiana Jones, add a touch of Highlander and splash in some Conan the Barbarian and wings and you get this guy. This is a fun book that has action, mystery and a flying barbarian who does feel the need to wear shirts. The art is something of a selling point here with Bryan Hitch back on form. It’s not epoch making stuff, but it’s the best Hawkman I have seen in a long time.
Superman/Action Comics

Superman turned 80 this and in a convenient bit of timing,  Action Comics reached the milestone of 1000 issues. As a fresh start sort of thing, DC just as they did in the late 80’s handed their flagship character to one of Marvel’s big guns who wrote a 6 issue series called Man of Steel. Taking the John Byrne told was Brian Michael Bendis on words and a  rotating cast of artists which attempted to breathe new life into an 80 year old character that many struggle to get. Mission accomplished. Bendis has a knack for dialogue and clawing new ideas from older ones and he writes a new but still very recognisable Superman. We have the Daily Planet, Lois Lane and a Metropolis that works as a city and a character. We have new histories, New villains and it’s the best the character had been in a long time.

With the media rights held at Fox, Marvel has downplayed their First Family for the last few years. Human Torch was in the Inhumans titles before arrives in Uncanny Avengers, whilst the Thing was in Guardians of the Galaxy and then Infamous Iron Man, the pair reunited in the excellent Marvel Two in One, which led to the return of the FF. After a long run on Amazing Spider-Man, Dan Slott and Sara Pichelli crafted a comic that feels like the Fantastic Four, this was fun sci-fi with heart that reminded me why I like the characters in the first place.  I enjoyed the start and am looking forward to the next issue, which is waiting upstairs as I write this. 😁

The year started well for the children of the Atom. X-Men Blue and X-Men Gold were really good and it was joined by X-Men Red and the 5 week long X-Men Black, which focuses on the villains as well as a story that reinvigorated Apocalypse as a character. Then came Exterminated the 5 part story which ended the original X-Men in their teens pulled into the future story in a fairly satisfying way. This also ended X-Men’s Blue and Gold series and so it was relaunched under its old name Uncanny X-Men with a weekly schedule and rotating creators, giving you X-Content every week, without the stress of following multiple titles. It’s fun, well put together with a compelling story and a huge cast. It’s the most interested in the X-Men I have been since Whedon did Astonishing 15 years ago.

Also the side projects are good too, with Ed Piskor doing a condensed history of the X-Men in Grand Designs, which was absolutely amazing as a story and a look at the history and continuity of what can be a tangled ball of continuity string at the best of times.