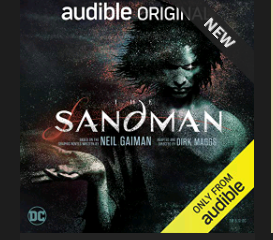 The point is, there’s a lot of reasons to not be cheerful, so I want to do some about positive stuff.

Now as someone who has read this blog before may know, I am an avid listener of podcasts (a topic for another post perhaps) and when dog-walking, walking to and from work and during my lunchtime walk to and from home. But recently I branched out into audio-books. My wife, the MIGHTY Rosie and my boy SuperSam have made good use of Audible of recent months, so since I get the e-mails for the account and they kept recommending the Sandman audio-book/audio-drama.

For those who may not know, Sandman was a critically acclaimed comic written by Neil Gaiman. It was an epic work that pretty much launched Vertigo and cemented Gaiman’s name as a legend in the field of comics. I missed out on the comic originally. Sandman was a late 80’s comic and my collected days started in the early 90’s so, you can see how I missed that boat. I read it years later of course, but for me, the art never stood up to the writing. The character designs were good, but I never enjoyed the visual storytelling enough to keep up with it.

Back to the present and the audio-book idea intrigued me and the advertising for it was ubiquitous, so since I had credits to spare I downloaded it. I listened to it over the the space of a week or so and… it was good.

The basis of the story is that Dream of the Endless, one of several beings that represent concepts such as death, desire, destiny and despair is captured on the earthly plane by a sorcerer in 1916 and for something like 70 years is trapped, cut off from the Dreaming, the plane we visit when we dream. He escapes and the story continues into his reclaiming his tools and then his kingdom. He encounters DC universe characters like The Martian Manhunter J’onn J’onnz, Mister Miracle, John Constantine, Lucifer, JLA Villain Doctor Destiny and his older sister Death. There are also other denizens of the Dreaming, creatures of the Faerie and even a nightmare or two.

The story is broken down into 20 chapters, the overall book is over 10 hours in length and this allows several arcs and stories to be told as part of the whole book’s narrative organically. The art is replaced by narration and the voices are given form by an impressive cast including James McEvoy as Morpheus/Dream, Kat Dennings as Death and the ever capable Martin Sheen as Lucifer. McEvoy is in particular excellent as Dream, offering a measured performance of someone who is beyond the regality of a king and above the confidence of a mere man. He fits the character’s voice in the way that Kevin Conroy fits Batman.

It’s an ambitious project that does it’s best to give Gaiman’s opus an adaptation with wider appeal and it sticks the landing. I have recommended it already and hope that this leads to more of these DC audible productions because this one was great.

If you have the opportunity, download the audible app, the service has the 30 day free trial thing and by the you will have listened to the whole thing.

I was unsure about this when I started listening, but by the end I wanted more.