I am not, in anyway shape or form a fan of the Nu52. If there was any silver linings it came in the form of the Justice League series, written by fan turned pro Geoff Johns and originally pencilled by 90’s wunderkind Jim Lee it was DC’s new flashy opening comic and acting as  a jumping on point, we well as for many a jumping off point. It was an issue 1 in the truest sense of the word and after a number of Marvel options, I felt that a DC issue was a good idea.

Was it a good idea though? 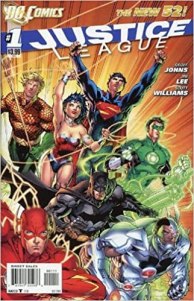 Justice League Part 1 was written by Geoff Johns and had pencils by Jim Lee who was inked by Scott Williams.