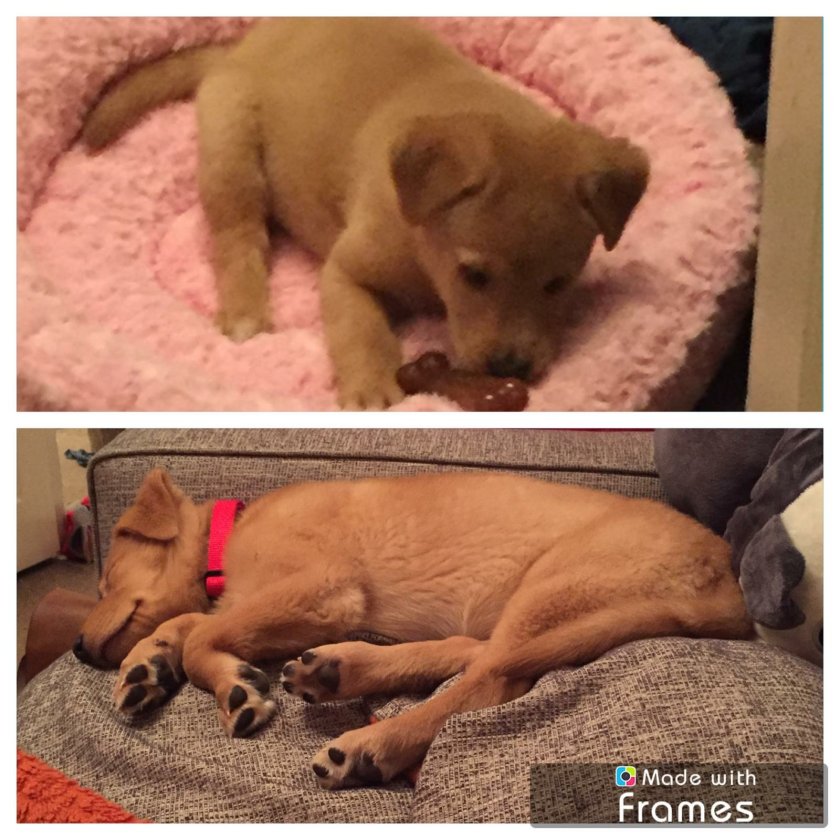 After the tragedy of losing Wilma the WTF dog, it became quite apparent that our family was now one that had a dog as part of it and that there would be no getting back to normal, without one. A few weeks after that realisation, the MIGHTY Rosie began perusing a re-homing website, on the idea that we would be getting a dog at some point. She saw this collie/retriever cross and just had to, since she had a similar dog once herself. There were no red-flags when we spoke to the people in question, several times in fact. But when we arranged to go get the dog, there were all kinds of things wrong, there was no mess, not a thing out of place (with a puppy in the house? ) and all the toys for this 8 week old dog were distinctly unchewed and it seemed to live only in the kitchen. None of these things are that suspicious, but when the MIGHTY Rosie went to pick this little puppy up, she leapt into her arms, as if trying to escape. This wasn’t a dog being taken to a new home, which we had dealt with before, this was a dog grateful for being saved. After a trip to the vet and a couple of eyebrow raising reactions from the dog we all came to the understanding she was from a puppy farm and she had not really been taken care of.

Whenever we gave her food (special food, since being a puppy farm survivor she hadn’t really a great digestive system) she wolfed it down, as though she didn’t expect to be fed later. Kind of getting angry as I write that down to be perfectly honest. Still, we bonded pretty much immediately and she quickly became a member of our family. We got a bit of an all clear from the vets over Christmas, our original plan was to not tell SuperSam that we were keeping her, in case there were some medical things that came to light. It was for the best, since we were all devastated by the loss of Wilma the WTF dog. So with the all-clear given, we left a scroll in the Christmas tree with a request for her to stay with us for SuperSam to read. The moment when he realised we were keeping the new dog may be the best moment we had at Christmas this year.

Well we’re now walking her, training her and from time to time spoiling her. We’re a family that has a dog and we were never going to go back to the way it was before. So my mornings and lunchtimes consist of bites and clean-ups and also someone being happy to see me when I get home. I get out of work and walk home to her at lunch, I walk her at night and as a family we are happier that she is there.

So much of this blog can be negative in the personal stuff I write, but now with the dozy 4 legged wonder at home, well it’s a happier start to the year. And we’ve been able to take a scared and malnourished puppy into a happy little dog who can sit and cuddle and also have her mad half hour of chasing nothing.

As for her name, it was apparently supposed to be Rosey, but we have only ever called her Lottie (Short for Charlotte) and now she’s home, home is a little brighter.

It’s a fact that took me till my 40’s to learn, but dogs make life better.

Liverpool based unrepentant geek, trying to understand what's going on in my own head, which is not always being a good place to be. Remember always, we live in a world of wonders. View All Posts

One thought on “Who’s a good girl?”