And as we approach the weekend.

Avengers, Justice League and the X-Men, all marquee teams of super-people and all subjects of the proliferation problem in 80’s and 90’s comics, with multiple teams and multiple books. From West Coast Avengers, to Young Justice and X-Factor, it’s easy to believe a set of characters is only good if they either are, it’d have spin-off or satellite teams. But often my favourite teams are either one offs, or using a second hand name. 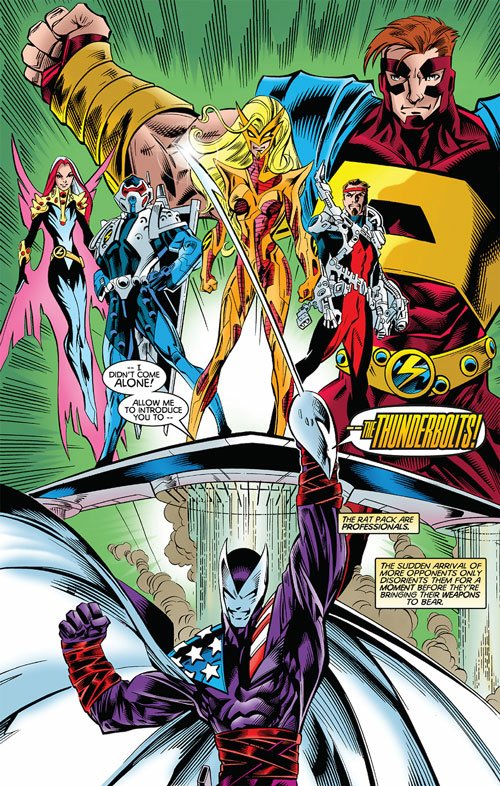 First appearing in an issue of The Incredible Hulk, this was a new team of heroes that rose to prominence in the post-Onslaught era of the Marvel Universe, consisting of Citizen V, Atlas, Meteorite, Techno, Mach-1_and Songbird, they were just new heroes inspired to fill the void left by the Avengers and the Fantastic Four. It soon transpired that this was a new incarnation of the Masters of Evil, in reality they were Baron Zemo, Goliath III, Moonstone, Fixer, the Beetle and Screaming Mimi.This series was by Kurt Buziek and Mark Bagley and was a highlight of Marvel’s Heroes Reborn era. After ditching Baron Zemo/Citizen V, this team of criminals tried their hand at actually being heroes, it was well written and had great art and the sense that anything could happen as these bad guys tried to be something more.

One of the first wave of Image comics in the early 90’s, it was the brainchild of X-title wunderkind Jim Lee and was a sci-fi tale of aliens and alien human hybrids in covert battle with less friendly aliens. It was more sci-fi than super-heroics, but with a memorable line-up: Emp, Void, Maul, Warblade, Grifter, Zealot and Spartan and then several additions and status quo changes, it was never boring.

Another 90’s Marvel title with Mark Bagley art, this time with Fabian Niceza on words. This was a mix of underused and forgotten characters, this was an ‘Arby’s team of young heroes including Firestar, Nova, Speedball, Namorita and Marvel Boy, together with new characters Silhouette and Night Thrasher. There were 90’s cliches paired with a social conscience of a sort and a rapidly changing roster that kept the series interesting and the team was never gone for too long.

A second tier Image title, it was written by Jim Lee with help from Brandon Choi and had art by Scott Clark, although a consistent art team would be hard to find for this story of a UN run super soldier crisis response team. With very 90’s members such as Batallion, Winter, Hellstrike, Diva, Fuji, Weatherman and Backlash, they were different from what Marvel and DC were doing at the time. Part Avengers, part Star Trek, this was an interesting idea that struggled to find it’s identity after the first few issues and benefitted greatly from a new writer when Warren Ellis took over and retooled the book considerably.

Guardians of the Galaxy

This was a bit obvious for me, rather than the second team with the name that appeared in the mid 00’s, this was a sort of Avengers in the futures with space opera trappings and more than the odd reference to the modern Marvel Universe. The team of Martinex T’Naga, Yondu Udonta, Aleta Ogord, Charlie-27, Nicholette Gold, Starhawk and Vance Astro all became favourite characters of mine, especially when Jim Valentino gave them their own title in 1990. I loved this series so much as one of the first comics that really hooked me. I could write about it all day, but I did a blog about it, which lays it all out quite effectively.

These were 5 teams that weren’t huge sellers or multi-title franchises, but were a lot of fun and I enjoyed each one, more than once.