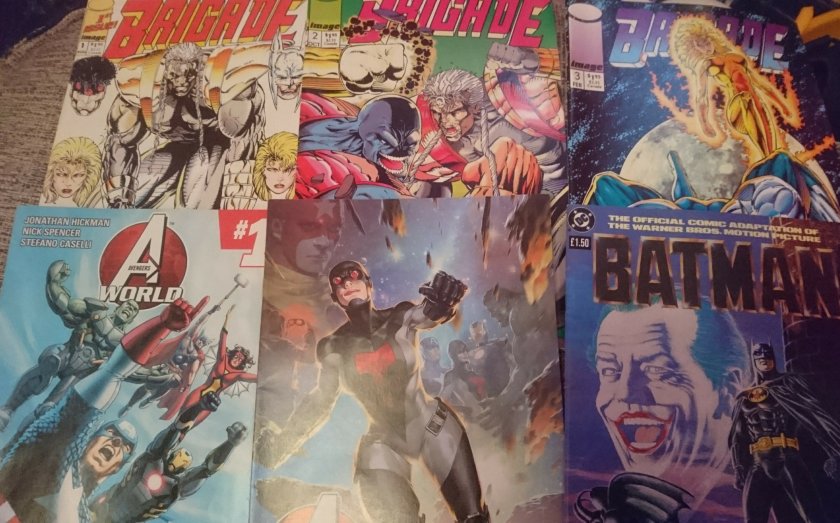 At the start of the year, I went to a comic mart near my home in Liverpool and to be honest, wasn’t in any way shape or form, impressed. Less dealers, less deals to be made and a sense of heigh-ho, here we go again. So when the next comic mart came up, I decided to go to the slightly larger one in Manchester. My intent was pretty much to go on my own, whilst the MIGHTY Rosie is geek-friendly or geek-adjacent, she is somewhat less an addict as I am, so given that, I expected to go alone. Instead, she decided to come with me and bring our boy.

Now let us be clear, I do not mean that I didn’t want to go with her, but I am uncomfortable when someone does a lot for me and since I don’t drive, my wife drove me there for little to no benefit to herself. When it comes to comics, I don’t feel comfortable asking someone to put themselves out for me, I really don’t, which I accept is dysfunction since I would do for someone else. We all went, it was a lovely sunny day, warm and bright, making me feel even more that we should be doing something else instead of feeding my addiction, but I digress.

We got to the mart and it was bigger than the Liverpool one, as expected, but with our recent experience of a sci-fi con and the recent increase in comic-cons and coverage of them, it may have been a little disappointing to the MIGHTY Rosie. It was, as most marts tend to be, lots of less than socially confident men, going through boxes, often with a list. There was an upside, saw an FaceBook friend there and that was a nice plus.

I didn’t plug that many gaps in my collection, but I saw lots of fun stuff that I could have a look at, without breaking the bank. 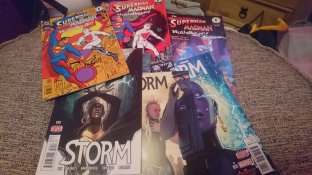 That wasn’t the highlight of that particular trip, no, because as I usually do, I picked up something for Sam (in this case a trade of the start of the Jurgens/Romita Jnr run on Thor which is a bit of an under-rated classic) and when I expected him to run off bored, I instead find him at the longbox next to me, looking at comics. Not for me, he just wanted to be doing the same thing and started looking and picking some stuff up. He ended up getting a Justice League comic and some Rebirth era Aquaman. Him looking for his own comics, next to me, got me a little choked up. The moment passed and we headed out. Every eager to do something else. Before we left, I made sure I picked up a copy of X-Men vol 2 #1 and X-Force #1 (these were comics I got at the first couple of marts I went to back in the early 90’s, so it seemed fitting) and we got in the car and headed for home. 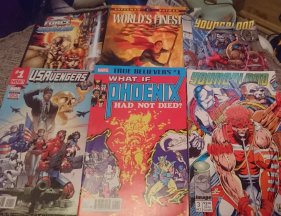 It was the drive home that I found the most touching, mum and dad in the front talking and son in the back, nose in a comic, oblivious to the world. He was me, a happier and better me and that right there was a beautiful moment that I don’t know I would have felt so clearly 9 months ago. Work has stressed me out, since this is the first year end that I haven’t been medicated in 4 years, so I’ve been feeling it. But that Saturday, I felt that too and it filled my heart.

Do I expect Sam to be a huge comic fan? Not really, but him getting the bug, just for an afternoon meant the world to me and the next weekend, when the sun came back out, we went to the park and played football for an hour or two. He got to be in my world for a bit and I returned the favour.

I get a lot out of comics and sci fi and all that stuff and all that, but my family are like the air in my lungs. I like having this place to talk geeky with all you fine internet people, but every now and again, I like to mention the things in my life that actually matter.

SuperSam, the MIGHTY Rosie, I love you both.

2 thoughts on “For the Love of Comics: The Power of Family”