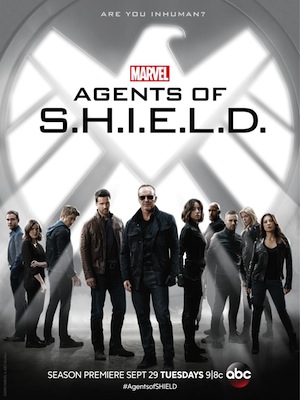 Overview: First shown on 10 January 2016, this season pushed the series further from the connection to the Marvel Cinematic Universe and was eager to move on and be very much it’s own thing. Now the inhuman subplot of the 1st and 2nd seasons are very much the main part of this series as it is ongoin.

Initial Status Quo: Several months after the battle of Afterlife and the disappearance of Dr Gemma Simmons and things aren’t going too smoothly. Terrigen has gotten into the food chain, through food, fish oil capsules and the like and there artheandom people all over the world going through terrigenesis and emerging as new Inhumans, with no understanding of what has happened or how to transition back to a more normal life. The public is scared and a new agency has been formed to deal with this new outbreak. The Alien Threat Containment Unit (known mostly as ACTU) is chasing down these new inhumans, treating them as hostile aliens. S.H.I.E.L.D. are losing ground and the ones they miss are vanishing without a trace. So it’s a race to get to each one. But these two factions are not alone in this quest. Also Leopold Fitz finds a way to use the monolith to open a portal to rescue Gemma Simmons.

First Twist: We learn very early on that the ATCU aren’t killing them, but believe S.H.I.E.L.D. is, turns out another Inhuman called Lash is killing these new-Inhumans. Coulson starts dealing with and then falls in love with the ATCU’s head Rosalind Price, learning that behind the ATCU is Hydra. Whilst this is going on, Grant Ward is restarting Hydra, being pursued by Lance Hunter and May. Hunter and May get close, but only succeed in sending Ward towards the last of the Hydra leaders Gideon Malick, the same man behind the ATCU. Malick orders Ward to kill Rosalind Price sending Coulson on a revenge fueled attack.

Second Twist: In confrontation with Hydra, Fitz, Coulson and Ward end up on the world they rescued Gemma from, they find that there’s something else there. An ancient inhuman who is trying to return to Earth, wearing the dead body of Ward. This inhuman, Hive allies himself with Malick and begins their attack on S.H.I.E.L.D. costing them the services of Hunter and Morse as well as funding the anti-inhuman hate group Watchdogs.

Third Twist: Hive casts Malick aside and begins to brainwash inhumans including Daisy in his scheme to convert all humans to inhumans or subservient Alpha Primitives. The season ends on this story and with horrific consequences for Daisy.

Epilogue: We then shoot 6 months into the future and we learn that Daisy or Quake is on the run and Coulson and Mack are hunting her at thee behest of S.H.I.E.L.D’s new director.

Purpose in the Machine: We find out where May got to and how far Fitz will go for Simmons.

4772 Hours: The story of Simmons’ time of the Kree world of Maveth told in snapshots over several months.

Maveth: Ward and Coulson battle on an alien world, while the Secret Warriors battle Hydra.

Singularity: Plotlines continue as Fitz/Simmons finally confront their feelings and become the couple so many fans ‘shipped.

In Closing: Series 3 was a departure from before in that it barely connected to the movies and tried to be it’s own thing. This was both positive and negative. The positive was that it could stand on it’s own and try new things. Sadly the negative was the like the comics it tried to make inhumans a thing. Once you take the recognisable inhumans out of the picture there’s nothing particularly interesting about them. There a bargain basement version of mutants and that’s what they are used as here. Once you’re past that, the series is as consistently entertaining and comic-booky as ever. Once again am looking forward to the next season.