I had my assessment with the NHS mental health team on Wednesday, where the full extent of my problems were gone through and examined. Imagine having every flaw pointed out as you realise how far you are away from the person you once were. Gut punch after gut punch as my illness was spelled out. I can’t say how hard it was, but I’ve had better days.

Took the next day and a half off work and sorted things out, organised DVDs, sorted and boxed away comics. Which left me with the realisation that the last four months of comics have been relatively un-enjoyable. So maybe with the exception of UK reprints and the DC hardback collections, knock regular comics on the head for the foreseeable future. I also went to the gym last night and was punished accordingly.

When I got back, me and the Mighty Rosie talked, a bit more in depth than we have in a while, that was good and I think we are a bit closer as a result.

Other stuff has gone on and this year is not really going as well as I like, but I am shown something because of this, I have the unconditional love of my son and the love and support of the best woman I could imagine knowing, let alone being with. The depths of her love continue to astound me.

I learned that you never reach rock bottom, not once at least, but bottom out several times and this last week has been one of those. Time to get back up, get my s**t together and fight, not for my family, not for my wife, but for me. I never fight for me, I need to.

We all have demons, those monsters in our heads, screaming and tearing, destroying and drowning us, but we don’t have to fight them alone. I have her at my side fighting with me, the Amazing Rosie, not a person to be f**ked with. I won’t win every battle, but with her, I finally believe I can win the war.

If you have someone in your life, who always has your back, always there for you. Cherish them, love them and if there’s anything more than friendship there, marry the s**t out of them. Smartest decision of my life was “I do.”

Well this got a bit of a downer, so here’s a picture of our son, dressed as the Flash 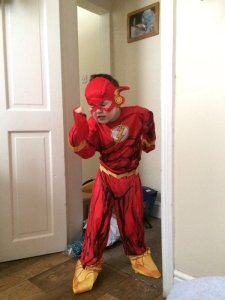 5 thoughts on “Feelings on a Friday 6: Brutal”